Found an interesting news story at BBC News Science and Environment written by Leila Battison Science reporter. The story talks about a study by the University of Bristol where scientists looked at the some of the oldest rocks on earth and demonstrated that that gold was delivered by meteorites long after their formation.

A quote from the story

Their results are published in Nature.
While the Earth was forming, iron sank to the centre of the planet, forming the core.
Any precious metals in the planetary mix would have gone with this iron and concentrated in the core, leaving the mantle devoid of elements such as gold, platinum, and osmium.

But this is not what we observe. In fact, the silicate mantle has up to 1,000 times more gold than anticipated.

Several reasons for this enrichment were proposed in the past, including delivery by meteorites, although until now it has not been possible to prove.

By measuring isotopes in rocks that are nearly four billion years old from Greenland, the team has managed to date the gold delivery, and to relate it to an event known as the "terminal bombardment".

The story also goes on to say that the scientists have used a totally different mineral to preform their experiments and  reach their conclusions that mineral in Tungsten.


"The proportions of gold and other precious metals are difficult to measure because they concentrate into nuggets, and we need to analyse a lot of rocks to get meaningful data." said lead researcher Dr Matthias Willbold.

They have therefore developed a way of telling this remarkable story of gold's extraterrestrial origin using a completely different element - Tungsten.

More on this story


The study is very interesting I wonder if it would be worth while do a little prospecting at Tungsten occurrences and perhaps do a few assays for gold in those samples?

The whole story about gold and other minerals being "deposited" in younger rocks of the earth as the result of being  impacted with 20 billion billion tonnes of asteroid material, is certainly interesting and intriguing.

May dust off some data on local Tungsten deposits. After all, information is the prospectors best friend! 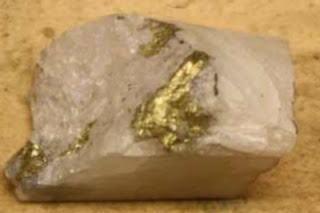 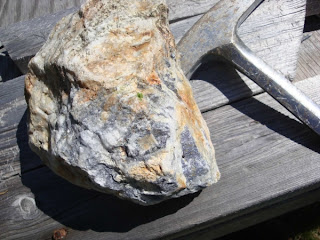 Sample from a Tungsten and Molybdenum Showing
Posted by Unknown at Tuesday, September 13, 2011

In future and option traders trade in lot’s so one can earn or loose quite big amount so it’s always advisable to avail future tips from the stock market experts.
We as a stock market trader should remember we are trading in stock market to earn money from share trading not to lose it as it’s our hard earned money so we should trade with due care.

wooww. . This is very interesting information and amazing, what do you inform a very helpful and useful for us, and this is a development in the world mining, thank you for sharing with us and I really liked the article that you give

Hi, I am a commodity tips provider and I like to read article or blogs, mainly I read all blogs, it is my habit to collect information where ever I can, it will never waste ,today I caught your blog and it is written nicely with good content.....I appreciate it....