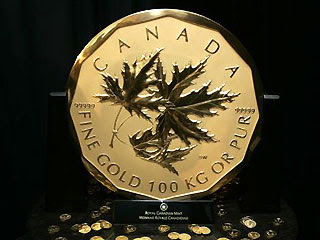 Are you a Gold Coin collector? A Serious collector?

Then you need to read about this monster.

The Royal Canadian Mint unveiled a welcome addition, on Thursday, a monster gold coin with a face value of C$1 million (U.S. $903,000). The Mint says this is the world's biggest, purest and highest denomination coin.

You can't argue with that! and Don't expect to keep one in your keepsake box unless you have a trunk, this coin weighs 100 kg's (220 lbs) and is the size of an extra large pizza.

Measuring 53 centimetres and over 3 cm thick, the monster coin is also handcrafted showing the Canadian Maple leaf on the face and the words Canada Fine Gold Gold 100kg.

The the new Mint Gold coins are adorned with a maple leaf and boast 99.999 percent purity, a notch above previous purity peaks of 99.99 percent.

"Since the Royal Canadian Mint upped the ante on the rest of the world in 1982, by raising the purity of gold bullion to four nines pure (99.99 percent) other nations have come on the scene ... Austria, the United States, and Australia being the case in point," said mint spokesman Alex Reeves.

What a coin to have. I think that the price of Gold is going to rise much more in the future. What do you think a coin like this would be worth in say 10 years from now? Leave a comment tell me what you think.

Great idea by the Canadian Mint. They make money selling a few of these monsters and they get $10 million or so in free advertising