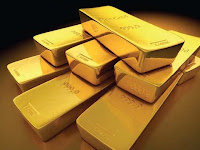 On 7th May 1999 the British Government under Gordon Brown, announced a restructuring of the UK’s reserve holdings to achieve a better balance in the portfolio by increasing the proportion held in currencies. Since that time a total of approximately 395 tonnes of gold has been sold at 17 auctions, run by the Bank of England on the Treasury’s behalf. The first auction took place on 6th July 1999 and "the program" concluded with the 17th auction on 5th March 2002.2002 report by the HM Treasury


I just finished reading a July 5 2012 news story carried in the Telegram, reported by Thomas Pascoe who worked in both the Lloyd's of London insurance market and in corporate finance before joining the Telegraph. In which he said that a great deal of Gordon Brown’s economic strategy would strike a sane man as troubling.

Here are some highlights from his blog at The Telegram

One decision stands out as downright bizarre, however: the sale of the majority of Britain’s gold reserves for prices between $256 and $296 an ounce, only to watch it soar so far as $1,615 per ounce today.

When Brown decided to dispose of almost 400 tonnes of gold between 1999 and 2002, he did two distinctly odd things.

First, he broke with convention and announced the sale well in advance, giving the market notice that it was shortly to be flooded and forcing down the spot price. This was apparently done in the interests of “open government”, but had the effect of sending the spot price of gold to a 20-year low, as implied by basic supply and demand theory.

Second, the Treasury elected to sell its gold via auction. Again, this broke with the standard model. The price of gold was usually determined at a morning and afternoon "fix" between representatives of big banks whose network of smaller bank clients and private orders allowed them to determine the exact price at which demand met with supply.

The auction system again frequently achieved a lower price than the equivalent fix price. The first auction saw an auction price of $10c less per ounce than was achieved at the morning fix. It also acted to depress the price of the afternoon fix which fell by nearly $4.

It seemed almost as if the Treasury was trying to achieve the lowest price possible for the public’s gold. It was.

One of the most popular trading plays of the late 1990s was the carry trade, particularly the gold carry trade. In this a bank would borrow gold from another financial institution for a set period, and pay a token sum relative to the overall value of that gold for the privilege.

Once control of the gold had been passed over, the bank would then immediately sell it for its full market value. The proceeds would be invested in an alternative product which was predicted to generate a better return over the period than gold which was enduring a spell of relative price stability, even decline.

At the end of the allotted period, the bank would sell its investment and use the proceeds to buy back the amount of gold it had originally borrowed. This gold would be returned to the lender. The borrowing bank would trouser the difference between the two prices.

This plan worked brilliantly when gold fell and the other asset – for the bank at the heart of this case, yen-backed securities – rose. When the prices moved the other way, the banks were in trouble.

This is what had happened on an enormous scale by early 1999. One globally significant US bank in particular is understood to have been heavily short on two tonnes of gold, enough to call into question its solvency if redemption occurred at the prevailing price.

Any guesses as to the particular USA bank referred to? Feel free to comment on this post.

Gordon you are lucky you have that gold in a less price, I found that gold pricesin 1990's are costly in the UK when I was there.