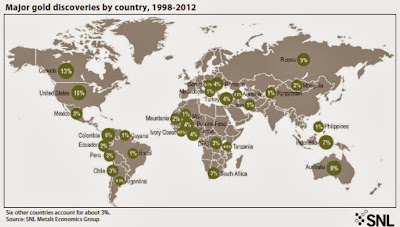 Gold exploration budgets increased drastically since 1999, reaching an all-time high of more than $6 billion in 2012, but the total amount of precious metal found in major discoveries fell short of replacing global production, shows a report by SNL Metals Economics Group.
While it is too early to judge the success of recent exploration, says the report, data for 1990-2012 reveals that miners' annual discovery-oriented gold exploration budget more than doubled between 1990 and 1997 from $930 million to about $2.2 billion.
According to the document, exploration budgets fell in 1998 along with gold prices to recover by 2003, jumping an average of 31% annually until last year. Read More at Source