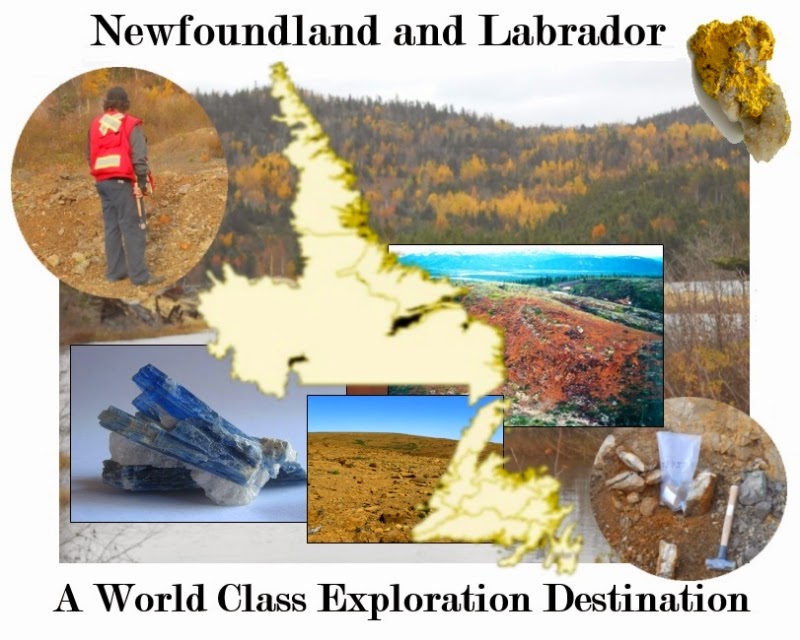 The 2013 Global Survey of Mining Companies by the Fraser Institute ranked the Newfoundland among the top ten most attractive jurisdictions for mining investment worldwide. Mining is a major economic activity in Newfoundland and Labrador. The most important mineral is iron ore. Several other minerals are also mined in the province, including silver, gold, lead, copper and zinc.

New mineral discoveries continue to be advanced even in these trying times of limited financing, particularly within the last five years. The island portion of the province is now considered to be an important emerging gold district on Canada’s East coast. Key gold discoveries have been made in a wide range of environments prospective for world class deposit types. At least 6 gold deposits continue to increase in both scope and amount of insitu contained ounces. Two expanded and modernized gold mills are now in operation, while a third mine is in the financing and development stage.

In a nut shell, the latest developments and discoveries are due largely to exploration success fostered by prospecting spirit combined with excellent geology and a stable political climate with a secure mineral tenure system.

The province remains relatively under-explored compared with other mineral-rich jurisdictions, thus creating a unique opportunity for mineral resource investment and new mineral finds. This is illustrated by the discovery of the world-class Voisey’s Bay nickel-copper-cobalt deposit on surface in 1993, during reconnaissance helicopter prospecting in search of diamonds.

Newfoundland and Labrador is the largest and most geologically diverse of Canada’s Atlantic Provinces. Its present setting on the eastern edge of the North American continent is the latest manifestation of a diverse and protracted four billion year history of cratonic, continental margin and oceanic evolution. The province hosts a collage of metallogenic environments well preserved in rocks formed at varying crustal levels in Archean, Proterozoic and Paleozoic mobile belts.

Newfoundland and Labrador is not only geologically diverse but also richly endowed with a wide spectrum of minerals, including iron ore, base and precious metals, uranium, tungsten, molybdenum, antimony, rare earths and industrial minerals.

Gold discoveries alone have been numerous over the last decade.These gold prospects include well-documented examples of high- and low-sulphidation epithermal deposits, bulk tonnage intrusion and sediment-hosted deposits, and gold-rich volcanogenic massive sulphide deposits. These highly prospective yet underexplored environments represent opportunities for significant new discoveries, in what is becoming an emerging gold district.

The province has a mining tradition spanning generations, and a sought-after work force with a diversity of mining experience and expertise. It has a diversified mining and mineral exploration service industry, geophysical and engineering consultants, diamond-drilling companies, and a large community of prospectors.

2014 has been challenging for the global mining and exploration industry but mining projects continue to progress in the province. The future remains promising with new mines or expansions in construction, or in advanced feasibility studies; and other mines returning to production after hiatuses. Mining will continue to be a major contributor to employment and economic development in the province.